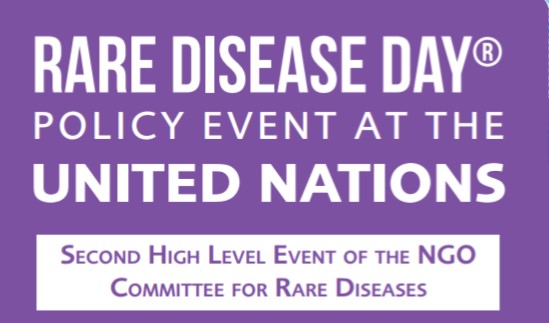 Over 30 speakers from around the world, including ambassadors and officials from the Permanent Missions to the UN of Brazil, Estonia, Japan, Kuwait, Thailand, and the United Arab Emirates, will discuss how to advance rare diseases as a global public health priority within the United Nations.

The event will bring together 100 participants from the international NGO community, UN agencies, national governments, and academic and research institutions.

During the event, the NGO Committee for Rare Diseases will launch a call for:

Yann Le Cam, Chief Executive Officer of EURORDIS and Board Member of the NGO Committee, said, “This event is a crucial step towards the integration of rare diseases into the upcoming UN political declaration on UHC and towards our end goal of a UN resolution on rare diseases. We are calling on the UN to adopt a resolution at the General Assembly that will formally make rare diseases a global priority, setting in motion a wave of policy actions that will ultimately improve the lives of the over 300 million people affected by rare diseases around the world, and in turn contributing to the achievement of the Sustainable Development Goals and the ambition to leave no one behind.”

Anders Olauson, Chair of the NGO Committee and Chairman of Ågrenska (Sweden), said, “We must ensure that the rights of people living with a rare disease are respected and that we are not discriminated against because patient population numbers seem small for each rare disease. In total, there are 6,700 rare diseases forming a community of over 300 million people.”

The NGO Committee for Rare Diseases was created in 2015 by EURORDIS and Ågrenska.  They work towards making rare diseases a global health priority on the UN’s agenda and within public health, research, medical and social care policies and structures around the world.

Further information can be found at the Eurordis website https://www.eurordis.org